Bozeman just officially gained its first park using the Trails, Open Space and Parks bond funding. The City Commission recently approved the park’s master plan so that construction can begin in the spring of 2016.

In December 2013, the Bozeman City new Commission unanimously approved using approximately $600,000 in funds from the Trails, Open Space and Parks Bond to purchase nine acres of land just north of Bozeman Pond Park. On April 28 the Gallatin Valley Land Trust (GVLT) sold the land to the City of Bozeman.

Recognizing the land as critical open space in an underserved and quickly growing part of town, the Gallatin Valley Land Trust (GVLT) purchased the land in December using financing from The Conservation Fund and privately raised funds. GVLT filled a unique role in this transaction by stepping up to swiftly purchase the land, which had other offers from residential developers, and aligned partner nonprofits to help create even greater public benefit. HAVEN has purchased 3 acres of the 12 acre parcel as a site for a future shelter for domestic violence victims. Run Dog Run has agreed to create a fenced, off-leash dog park on another portion of the park. 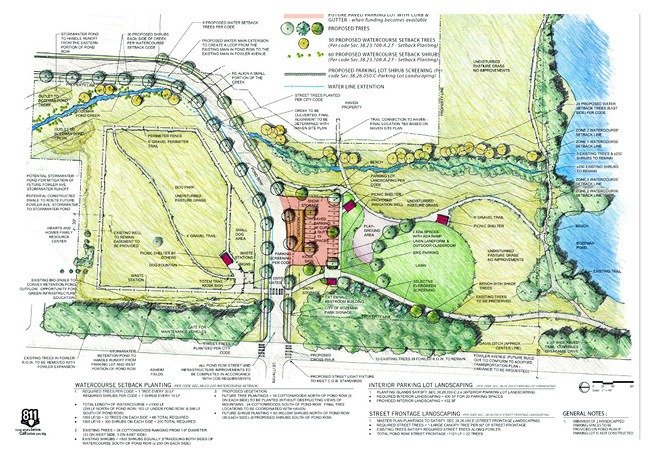 From the beginning GVLT has remained an integral part of the stages of the design and planning process and has long held a vision for trail and park connections in the area of Bozeman Pond to provide recreation, transportation, and safe non-motorized routes to schools and other community services.

An additional $400,000 of Trails, Open Space, and Parks Bond funds have been allocated to improve the parkland for public use. GVLT, Run Dog Run, and other partners have matched a total of $130,000 privately funded dollars to create additional improvements in the park.

The master plan for the park includes a natural area, paved and natural surface trails, stream enhancements, picnic facilities, and a natural playground. It will also include a paved parking area and restroom facilities. Additional acreage has already been transformed in to fenced off-leash dog park. Trails will connect the current park with the newly acquired park land totaling a combined 24 acres, to create one of the largest city parks in Bozeman.

Kelly Pohl, Associate Director of GVLT, says “we’re excited that this project is moving forward so quickly. We anticipate that this park will be the first TOP funded project that the public can use and enjoy.”